There are lots of ways to embarrass yourself on the golf course. Thinning a flop shot, missing your tee shot, three-putting (or worse). Golf calls for a maddening and often difficult to achieve mix of laser focus and relaxation, a mental state somewhere between Dustin Johnson’s unhurried, strolling, nothing-bothers-me-at-all attitude and Tiger Woods’ steely-eyed, banked-fires, seething determination.

Lose that delicate balance and you’ll find yourself doing all kinds of colorful things on the golf course, most of which you won’t want anyone witnessing. One of these spectacular missteps is the skulled shot.

What is the Dreaded Skull Shot?

If you’re already a regular player, you know what a skulled golf shot is, even if you’re not familiar with the terminology. The skulled golf shot is when the bottom of your club connects with the middle or top (the skull) of the golf ball instead of hitting it flush. It’s also known as topping the ball.

When you do this, you’re not making crisp, clean contact with the ball and you aren’t putting forward momentum behind it. Instead, too much of the power behind your shot is directed into the top of the ball, which naturally drives it down instead of up and forward.

Hit the middle of the ball and you can expect a thin, low-trajectory flight path aimed heaven only knows where. This is a pain if you’re in the fairway but a score destroyer if you are trying to hit a controlled shot from just off the green.

Hit the very top of the ball and you’ll get the worst result of all: the pop-up that goes absolutely nowhere. You just dribbled a golf ball. Is it embarrassing? Probably. But it’s a mistake that’s easy to fix.

What Causes a Skulled Shot?

To choose the right solution you’ve got to understand what you’re doing wrong. Obviously your club face is striking too high on the ball at impact. But why? Here are three of the main reasons this happens.

1. You’re coming out of posture. 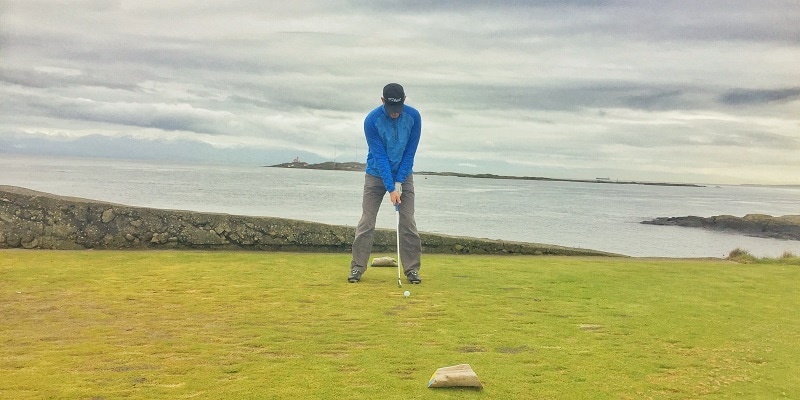 You might have the perfect set-up: great stance, smooth backswing and excellent follow-through. But if you tend to straighten up during your downswing, you’re pulling your body out of posture, which has a big impact on the path of your club face.

And it makes sense, doesn’t it? The club is naturally going to be drawn up if you straighten your posture, which pulls the club face up as well. Considering the diameter of a golf ball is barely over one and a half inches, even a small change in your stance can make you skull the shot.

Many people unconsciously straighten up while trying to apply more power to their downswing. Others are trying to correct a takeaway that strays too far from a healthy swing path. Still others may be letting their hands come through too soon in the downswing and are trying to avoid hitting the ground. Whatever the reason, it has a negative effect on how you hit the ball.

2. You’re hitting the ball on an upswing.

Ideally, the club face should meet the ball at the very bottom of its swing plane, catching the ball before it moves upward in order to ensure the greatest distance and optimal loft.

If your swing bottoms out before it reaches the ball and you wind up hitting it on your upswing, the base of your club is going to clip the upper part of the ball instead of the bottom. Bottoming out too early can happen for a variety of reasons. You may have your weight shifted too much on your trail foot or you may be decelerating in an effort to control your distance. Either way, you can’t hit the ball flush on an upswing.

You might be flipping your wrists towards the ball as you come down in a subconscious effort to add more power into the shot. And, as a matter of fact, some players can successfully do this, especially as a means to correct a slice or a fade that has crept into their game.

But flipping your wrists even a moment too soon will result in the previous mistake: hitting the ball while your club face is on an upward path. Wrist movement has to be timed precisely to work the way intended, otherwise you’re going to introduce a whole new problem to your game.

How to Fix This 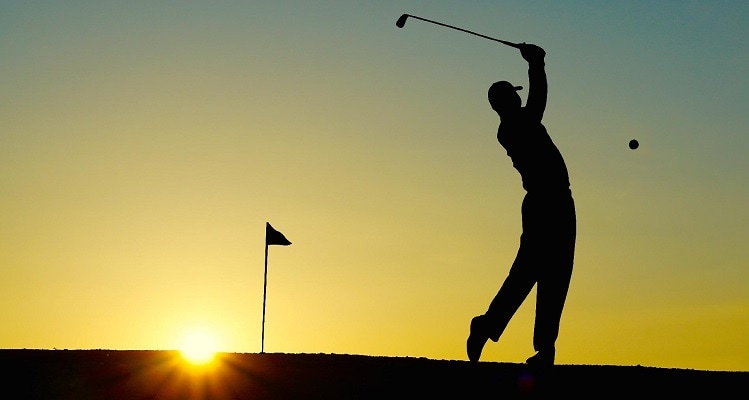 Make sure you’re maintaining your posture throughout the shot. Even if you’re new to golf you’ve probably heard the oft-repeated adage about keeping your head down when you’re hitting the ball. This is inaccurate advice centered around an accurate principle: keep your head on the same plane through your shot.

Think of this horizontally instead of vertically. Raising your head vertically to follow the shot with your eyes (or for whatever reason) means coming out of posture. It makes you stand up. However, if you turn your head but maintain your spine angle, you’re maintaining posture.

Watch the professionals. You’ll notice that after they hit a shot, they’re typically leaning to the right (if they’re right-handed) with their head on the same plane it was on when they first addressed the ball. This helps keep the club face in the same position throughout your swing.

Strike down on the ball.

Avoid hitting the ball on the upswing by changing your stance. Position the ball in the middle of your stance, then settle the majority of your weight on your lead foot. This setup allows you to strike down on the ball and make solid contact, using the loft in the club face to drive the ball upward.

Make sure you aren’t bringing the club up too sharply in your backswing. An overly steep angle of attack is usually the result of too much movement in the arms and not enough shoulder turn. Trying to get the club face back into position with the ball from this angle often causes the club face to slide past the ball, topping it in the process. Create a wider motion by rotating your shoulders fully.

If you find yourself struggling with skulling the ball in the middle of the round and all of these adjustments that are so much easier to work through on the range are escaping you, put the ball back in your stance. It’s a temporary fix to stop the hemorrhaging until you can put in some post-game practice.

Think about your wrists.

What you’re doing with your wrists has a direct impact on the club face. If you’re getting flippy with it, so is the club face. Take a page from Dustin Johnson’s book. It’s impossible to watch his swing in slow motion without noticing how flat his wrists are through his shot. You may not be able to imitate this — maybe no one can — but it gives a little insight into how important your wrist position is at impact.

Butch Harmon recommends imagining that you’re hitting the ball with the back of your wrist. This simply means the back of your wrist should be flat enough at impact that it’s facing the target. This stillness in the wrists not only encourages good hand control, it also helps you to hold off coming through on your downswing until the right moment.

A Few Drills to Practice

If losing posture is your kryptonite, hold a lightweight bar across your chest and shoulders. Get into your ball-striking setup. As your rotate your shoulders back in imitation of the backswing, the leading end of the bar should point down at your ball. Then, as you rotate back through, the trail end should point down where the ball was. Imagine making an elliptical movement with the bar around your body.

Any misalignment will immediately become apparent. If the bar is pointing more in front of you than towards where your ball was teed up, you know you’re losing posture. Work on making a smooth shoulder rotation while keeping your spine stable. Even if you turn your head, make sure your neck is in the same spot. If for some reason this notion is still eluding you, here’s a drill you can do right now. Sit in a chair. Lean forward and rest your elbows on your knees. Then look left or right without ever moving your elbows away from your knees. Boom! You’ve got it.

If hitting the ball on an upswing is what’s causing you to skull the ball, try this: place a tee in the ground one inch in front of your ball, on the target side. Make it your goal to strike the tee. Obviously, you’re going to hit your ball in the process but by making that mental shift your striking zone is going to move forward.

Many professional coaches encourage making a one-dollar-sized divot past your ball. This supports striking down on the ball and following through low enough to skim the ground after the shot.

Lastly, if loosey goosey wrist movement is your downfall, put a bit of elastic around your lead wrist. (Inside tip: use a soft hair tie instead of a rubber band.) Then slide something flat under the elastic on the outside of your wrist, like a tongue depressor or a short ruler. You’ll get immediate feedback on how soon and how severely you break your wrists during your swing. Keep your lead wrist flat through impact to avoid feeling that uncomfortable pressure.

Skull the Ball No More

Your personal swing is an ever-evolving thing. It’s very easy to fall into bad habits in a sport where fractional changes can impact the ball’s flight in big ways. Once you get past the human aspects of golf — the emotions, the stress, the nerves — it all comes down to physics. The ball is going to do what getting hit made it do. Keep this in mind, and even skulling the ball will become a simple problem with a simple fix.