If you’re familiar with golf, the title needs no explanation. No one has mastered the short game quite like Phil. That’s how he manages to be one of the greatest golfers of all time when half his tee and fairway shots find trouble. And one of his best-executed — and most fun to watch — short game shots is the flop.

Imagine the difference between throwing a ball (giving it lots of forward momentum) and tossing a ball high in the air (giving it upward momentum). The first ball is going to hit the ground, skip and roll. The second ball, with power under it and not behind it, is going to land softly and roll very little if at all, depending on the slope of the ground it lands on.

Frankly, it isn’t a shot you need to use a great deal. But when you need it, you certainly better know how to pull it off. It’s an emergency shot, when you and your personal golf game break the glass and turn both keys at the same time while the sirens blare. Do it right and your playing partners are going to start worrying about the money they bet against you. Do it wrong and you may as well go sit back in the cart.

The Flop: What It is and When You’ll Need It

Today, we hear a lot about power in the golf game. Players like Rory McIlroy and Dustin Johnson are smashing it off the tee, and the newly beefy Bryson DeChambeau is currently averaging 337 yards with his driver. We certainly heard all the groans and murmurings when Tiger made his return and wasn’t getting the distance he used to from the tee box, and why? Because power and distance have become linked with winning.

But around the green, where most of game is won — and lost — power isn’t the key element. Not by far. Skill is. Control is. Knowledge is. Creativity is. Confidence is.

When will you need to use it? Picture it: you’re on the wrong side of a greenside bunker. The pin is just on the other side of the bunker and you don’t have a lot of green to work with; either it’s a small green or there’s a lot of risky runout behind the flag. The bunker may also be deep, with the green above your feet.

What you’ve got to do is clear the obstacle in your shot — the bunker — while landing the ball so softly that it doesn’t gallop away from the pin. Pitch shots and bump and runs are designed to find the green and roll out, and punch shots are low-trajectory, meaning your ball is liable to hit the lip of the bunker and fall in.

The solution? The flop. Hitting the ball high and soft will enable you to eliminate the problem of the bunker as well as clear a lie that is well beneath the surface of the green. It also helps control the ball’s movement after it lands, preventing a lengthy putt to save par or better.

First, visualize what you’re doing. This isn’t a normal shot where you’re trying to hit it flush with the club to garner the most distance. Instead, your aim is to scoop your club head under the ball so that the momentum comes from underneath the ball, making it pop skyward.

Next, assess the lie. Your ball will react differently depending on whether it’s on a firm surface or fluffy, deep grass. Let’s start with a tight lie.

Hitting Off a Tight Lie

Choose your most lofted club. The amount of bounce you go with seems to depend on who you’re taking advice from. LPGA member and instructor Maria Palozola recommends choosing a club with low bounce so you don’t connect too soon with the ground and wind up blading the ball. Phil, the man himself, plays with a club that has ten degrees of bounce but with a leading edge that allows him to get under the ball. Practice will determine what works best for you with different ball lies.

Your ball should be aligned with the instep of your lead foot and your weight should be heavier on your leading leg. This position should allow you to get under the ball rather than accidentally hitting it on your upswing and skulling it.

Your stance is up for debate as well. Phil seems to take an ordinary stance with feet no more than shoulder width apart and slightly open. Dustin Johnson, on the other hand, takes an exaggeratedly wide stance with his feet well open. The point of Johnson’s stance is to ground your lower body and keep it stationary while your upper body does all the work. If you find yourself wanting to rotate your hips into the shot, take a wide stance like Dustin and keep your hips quiet.

Open your club face all the way. The face should be pointing towards the sky while the toe of the club is virtually on the grass. Having a wide stance can help you here as well, since it causes you to flatten the club and keep the face open.

Setting up for the flop shot is one instance where you don’t want to put a forward lean on the club shaft. Instead, put the shaft in a neutral position by pointing it toward the buckle on your belt or even slightly back of it. Remember, a forward press is all about compressing the ball to drive it farther. That’s not what you’re going for here.

Lastly, give it a full swing. Keep your grip easy and your arms soft. Your swing plane should follow the line of your toes. Let your wrists break easily in the backswing but don’t hold your hands off as you come down. You don’t want to create lag, which will compress the ball. Instead, allow your arms, hands and the club shaft come through as one. Don’t hesitate after you make contact with the ball. You want to execute a full, relaxed swing.

This is a shot that takes commitment and confidence. Letting loose with a full swing just yards off the green is enough to make most people sweat and for good reason. If you get any part of this shot wrong, a full swing is liable to land your ball closer to the next tee box than to the pin.

Hitting Off a Fluffy Lie

In this case, your swing remains the same. What changes is the weight distribution of your stance. Instead of putting your weight on your lead leg, balance your weight evenly on both legs. This levels out your angle of attack, allowing you to get more bounce out of the ball instead of focusing quite so hard on slipping under it. Notice the word “quite,” since getting under the ball is still important; it simply needs to be done in a way that takes the lie into consideration.

One more thing: you may find yourself on fluffy grass but with your ball sunk deep. This is like having a tight lie but with the added concern of thick grass to strangle your club head on the downswing. Go with your original stance, weight pressed forward. Keep everything the same except add more power to your swing to cut through the grass. 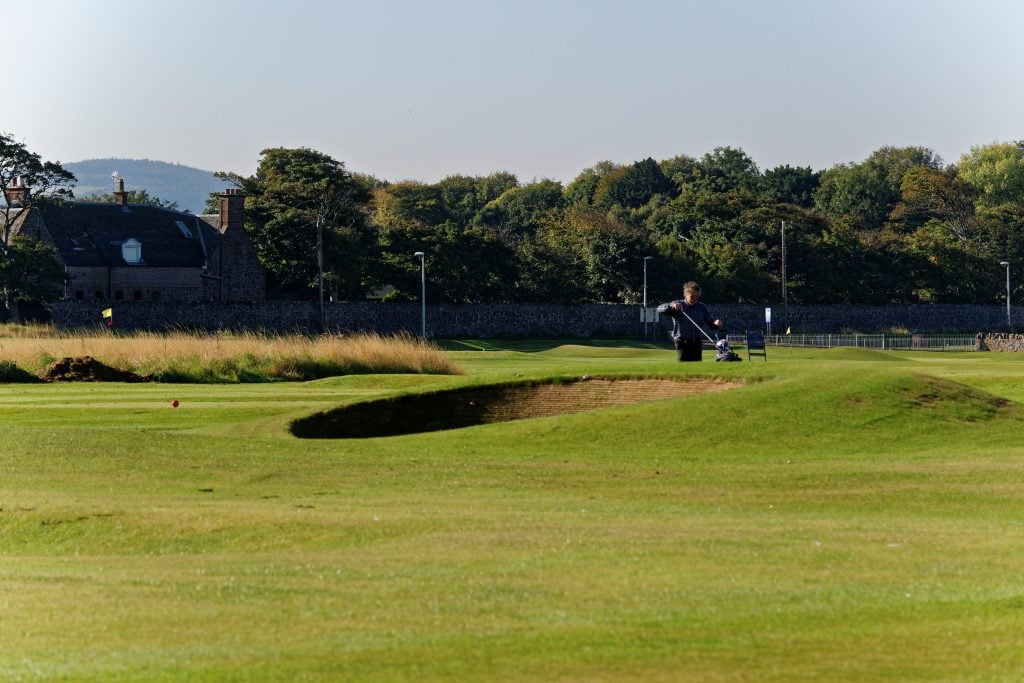 No amount of studying up on the flop shot is going to replace good old-fashioned practice. Choose a course in your area that has a generous practice green for chip and pitch shots, preferably one that doesn’t directly face a road. W

hile you’re figuring the swing out you can expect to hit some wild ones so don’t put yourself in a position where you could potentially take someone’s windshield out. (This is only partially a joke; if you’re truly worried about errant shots, start with hollow practice balls.)

Concentrate first on the main principle of the shot: popping the ball in the air. Keep your body relaxed. Swing as though the head of the club is an anvil whose weight pulls itself down and under the ball, but remember to follow through. Swing smoothly and with an even tempo. Keep your lower body still but allow your upper body to turn towards the target after the shot.

As you become more comfortable, try the shot from different distances from the green, starting at 25 yards from the green and moving closer. Then work with tight lies and fluffy lies.

One last thought: the flop is so different from the rest of the golf game that you shouldn’t slack on practicing it even when you feel you have it mastered. Muscle memory counts for a lot. Make this part of your usual practice routine so you’ll always have the flop shot in your arsenal, ready to go whenever you need it.