Few players want to see their fairway shot miss the green and land in a sand trap. It’s not like dunking your ball in a water hazard, where all you have to do is take a drop and a one-stroke penalty. No, you have to actually HIT IT OUT.

You already know the worst possible outcome: hacking away hopelessly, sending sand flying everywhere but completely missing the ball until you bitterly resolve to give up on golf altogether, sell your clubs on eBay and take up some angst-free sport like table tennis.

Until next weekend, anyway.

But landing in a greenside bunker doesn’t have to be the death knell of your game. Once you learn the mechanics of hitting out of sand, whether it’s soft or hard-packed, getting out of a bunker can become an enjoyable challenge. Don’t shrink from it, embrace it. Practice as much as you can and then practice some more. The next time your ball finds a sand trap, you’ll be able to approach it with confidence, not trepidation. 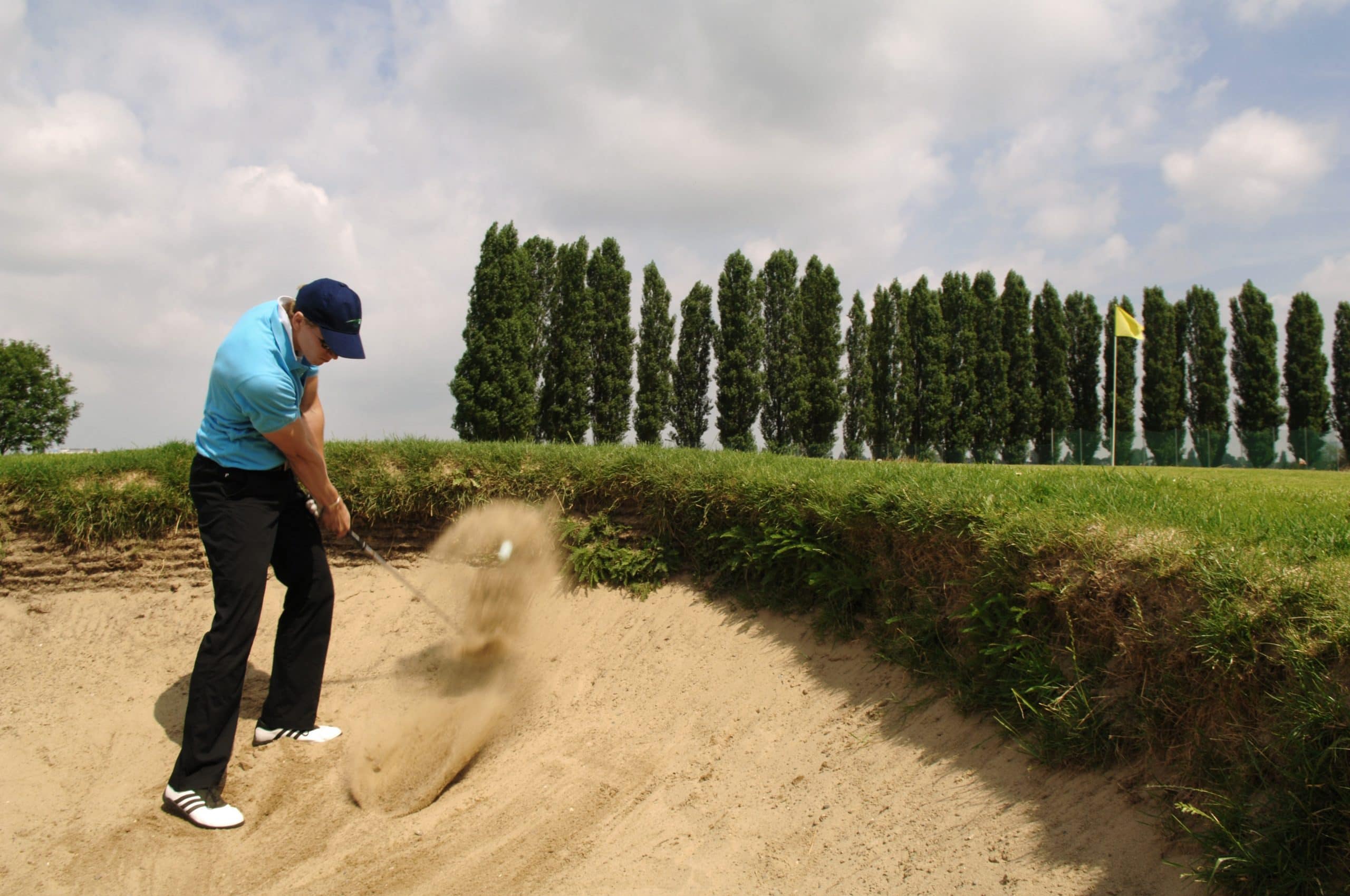 Golf can be unpredictable, that’s no secret. You could hit the best shot of your life, get an unlucky bounce and find your ball nestled in the roots of an oak tree on someone else’s fairway. You could hit an ugly shot and have it skip 200 yards to rest right next to the pin. When you play long enough, you see it all.

So dividing bunker lies into three categories is by no means a guarantee that these are the only three lies you’ll encounter. They are the most common, however, and learning how to approach them will give you the tools to approach the other, crazier lies.

The weather is good, you’re playing relatively early in the day and the bunkers are freshly raked. Your ball finds the middle ground of the bunker, where the sand is soft but not super-fluffy.

This is a good lie. You’ve got plenty of room to get underneath the ball without having to dig it out, plus you aren’t trying to hit it off a hard surface. As far as greenside bunkers go, this is an ideal setup.

Choose a lofted club with a medium amount of bounce. Picking a sand wedge might seem like the obvious choice but the truth is you can hit out of a bunker quite successfully with any of your wedges, as long as you’re choosing the right bounce and loft for your lie.

Open the clubface all the way. Your goal here is to glide through the sand under the ball. You aren’t trying to make solid contact with the ball at all. Doing so will cause you to hit it thin, which will either make the ball come out shallow and hit the lip of the bunker (putting you right back in the same spot) or, if the bunker isn’t deep at all, send your ball flying well over the green. Instead, your goal is to hit about one to two inches behind the ball and lift it out with a healthy splash of sand. It’s like hitting a flop shot on the beach.

Now that you’ve opened the clubface, adjust your aim. If you’re right-handed, an open clubface is going to make your ball go right, so aim left of the target; if you’re left-handed, aim right of the target.

Position the ball so that it’s near the instep of your lead foot. Now, shift most of your weight to your lead leg. Stay this way throughout your shot. This gives you the right angle of attack, allowing you to slide through the sand under your ball steeply enough to pop it up and out.

The last two important elements: make a full swing, and make a compact swing. Don’t start with a full backswing only to falter as the club comes down; you’ll never make it out of the sand. The more you practice a standard lie bunker shot, the more you’ll be able to trust using a full swing. It’s really about having the confidence that a full swing isn’t going to get you into more trouble.

And then the compact swing: imagine your swing arc taking a “V” shape. Keep your elbows close to your body as your arms come through. This is a shot where your arms are doing most of the work rather than your body. Let your wrists break on the backswing and let them roll over as you come through. As you complete the shot, your club handle should remain low and close to your waist the entire time.

This time your ball has found very soft sand and hit it hard, causing it to sink at least halfway down in its own little nest. A lot of golfers refer to this as a fried egg. A fried egg presents an additional challenge to the bunker shot.

You can’t just open the clubface and approach it the same way you would a standard lie, because trying to slide the face through the sand behind a plugged ball will make you skull it. The ball will simply be in the way. On this shot, close the clubface. This allows the leading edge of your clubface to dig into the sand and free the ball from its trap.

Put the ball evenly between your feet and widen your stance for greater stability. Your ball may be buried in the slope, making your stance uneven. Widening your stance in this case is even more crucial, as you need to keep your lower body steady throughout the shot.

You don’t want to lose your balance and cause your weight to fall back on your trail leg as you’re coming through. You still want your weight to be on your leading leg so you’re striking down on the ball.

This time, you don’t need to concentrate on a full follow-through. This is like a chop shot, where all the clubhead’s energy is going down onto the back of the ball like the blade of an axe falling down onto a piece of wood. You don’t need much if any of a follow-through. In fact, you can leave your clubhead buried in the sand. But hit with strength, aiming about one inch behind the ball.

Hardpan lies usually happen when the bunkers aren’t being properly maintained. The bunkers are seeing a lot of action and the multitude of footprints combined with daily moisture from the sprinklers compresses the sand and results in a compacted, hard surface.

Being on hardpan in a bunker is like having a tight lie outside of the bunker. There’s no point trying to get into the sand behind the ball because your ball is sitting upright. The best you can do here is take a small divot.

As before, keep your lower body quiet while relying on your arms, wrists and shoulders to move the ball. This time, though, keep your club face totally square. Keep an even tempo as you move through the swing.

Whether you stop the swing waist-high on the follow-through or come all the way around your shoulders depends on how far the pin is from your position. Practice both to find out how far the ball flies in either case. 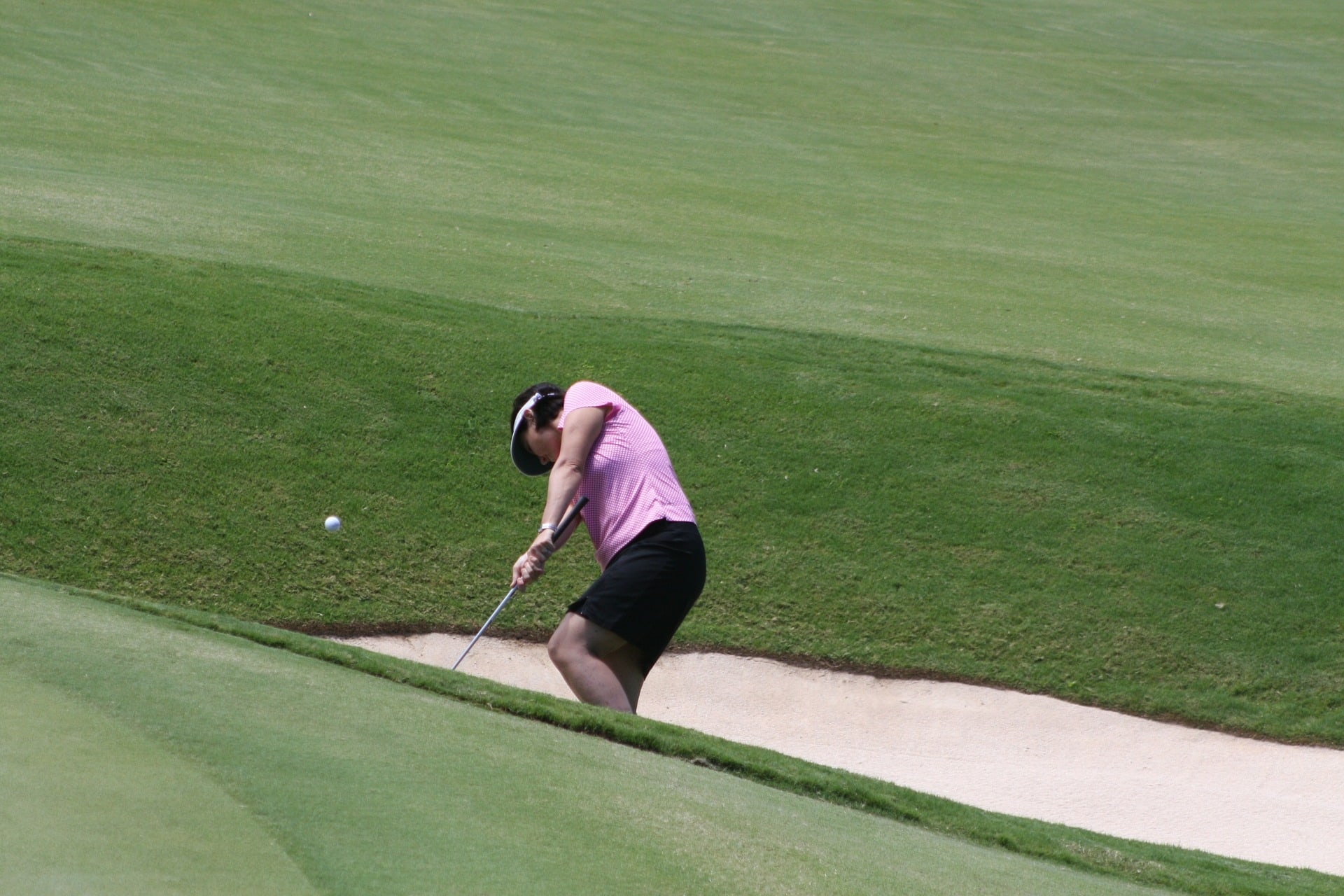 Nothing can replace practice with any golf shot and particularly with greenside bunker shots. Study the mechanics then test yourself with a variety of lies. Remember to have an array of wedges on hand to work with. Soft shots require a wedge with good bounce; hardpan shots need as little bounce as possible. The more you practice, the more confidence you’ll gain. Pretty soon, the next time you hit into a greenside bunker, you’ll be able to smack it out with ease and assurance, and the fear you felt in the past will be gone for good.