The main difference between chip shots and pitch shots is the ball flight. Chip shots stay low, hit the ground quickly and roll out. Pitch shots climb higher in the air and land softly with just a little rollout or even some backspin, depending on how you hit the ball.

Golf is really two games: the long game and the short game. And of the two, the short game is the one that largely determines your bottom line. You can hit beautiful tee and fairway shots all day long but without a comprehensive short game you’re still going home with a scorecard peppered with bogeys (or worse).

It’s an irony of golf that successfully completing a hole comprised of hundreds of yards of ground depends so heavily on how you play the final thirty. Yet, it makes sense. The first two or three shots primarily require power and accuracy, while the final few require finesse, restraint and calculation. The worst thing you can possibly do is find yourself short of the green with no idea how to get your ball where it needs to be.

To build a solid short game you need to learn two of the most essential greenside shots: the pitch and the chip. Both will get you out of an awful lot of trouble.

The Key Difference between Chipping vs Pitching 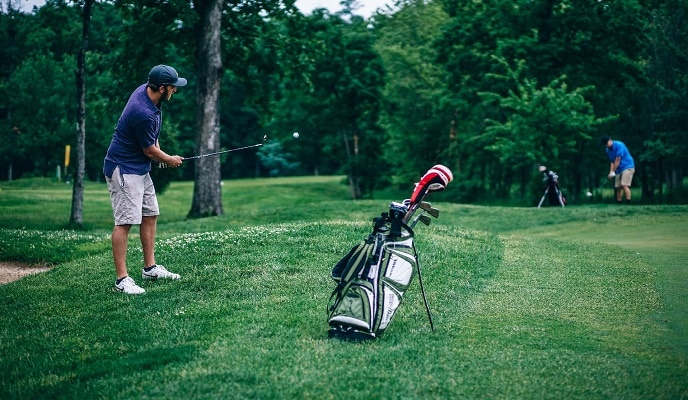 The main difference between chip shots and pitch shots is the ball flight. Chip shots stay low, hit the ground quickly and roll out. Pitch shots climb higher in the air and land softly with just a little rollout or even some backspin, depending on how you hit the ball. There are other differences as well, including how you grip the club and the mechanics of the swings, but knowing how the ball reacts to each shot is the key to determining which shot you need to make when you’re playing.

Chip shots are great for when you’re about twenty yards from the green or closer and you have a lot of green to work with. Because the trajectory of the shot is low, the momentum is behind the ball, which will cause it to check up on the ground once or twice before rolling until the momentum is exhausted. This is perfect for when the pin is located at the back of the green and you just want to get your ball on the green and let it roll with the slope close enough for a tap-in.

Pitch shots are a better choice when the pin position is near the front of the green and you’d rather the ball land quietly. Hitting the ball up in the air means it will have little to no forward momentum when it hits the green. If you add backspin, the ball will roll towards you once it lands. This works well if the green has a lot of slope behind the pin; in this case, aim to land so that the backspin causes the ball to roll towards the hole after it lands.

The flight of a chip shot is only meant to cover the distance between where you’re standing and the fringe of the green. From there, the ball should catch the green and follow its slope and undulations. Because of this intentional and considerable rollout, chip shots should be as carefully planned as if you’re putting.

When to Use A Chip Shot vs a Pitch Shot

The pitch shot is the right choice if you’re up to fifty yards away from the green and either have a flat putting surface or not a lot of green to work with. The greater ball flight will help your ball carry the distance and stop quickly once it lands. A pitch shot is also a good choice if you have an obstacle to clear between you and the green, such as a greenside bunker. (If you need to clear an obstacle but you’re quite close to the green, a few small adjustments will turn your pitch into a flop shot; more on that later.)

The chip is right if your ball is closer to the green with no obstacles in the way, particularly if it’s a roomy green and you’ve got a lot of distance to the flag. A chip is part iron work, part putting. The undulations of the green play a huge part in this shot and should be read prior to chipping.

How to Play a Chip Shot

Choose which club to hit with. For short shots, use a wedge; for longer shots, use a middle to long iron. The less loft on the clubface, the further the ball will go before it checks and rolls.

Decide where you want the ball to land and how it will roll based on the slope of the green. It’s a good idea to hunker down and read the green as if you were putting. Ideally, a chip shot should land near the front of the green and roll out from there. If you’re confronted with deep rough, aim to clear it entirely, otherwise your ball will probably get stuck there and not roll at all. Once you know where you want the ball to land, line your clubhead up with that target spot. If you need some help keeping up with your target, choose something close to you — a blade of grass, a shadow — that is on-line with your target and aim for it instead.

Align the ball with the instep of your trail foot. Your stance should be narrow, although not so narrow as to make it feel uncomfortable or unnatural. Put a small forward lean on your club shaft and rest most of your weight on your lead foot. This combined with the ball position will help you hit the ball first but keep its flight flat and low.

A chip shot swing is a compact and even rotation of the shoulders and lower body, with the arms acting like a pendulum that goes back the same distance that it follows through. Your hips don’t have to be still; instead, let them turn towards the target in a gentle, fluid motion. Your swing should be a supple, relaxed movement with no hesitation and no deceleration. It isn’t a big swing but at the same time you aren’t trying to keep your arms close to the body. Your goal is to maintain the triangle created by your forearms and wrists through the entire thing, keeping the clubhead below your hands and below your waist from start to finish.

You don’t need to break your wrists in the backswing, although some people choose to do so slightly. If hinging your wrists a little in the backswing works for you, don’t compensate for it by turning your wrists back over as you come through impact. You don’t want to wind up flipping your hands as you reach the point of contact; instead, keep the back of your wrist flattened towards the target to ensure the club face stays on-line. The shaft, clubhead and your arms should be in alignment as you make contact with the ball.

One thought about your grip: many people choose to use the same grip they would for a regular shot, while others prefer to use their putting grip. Practice will uncover which grip works best for you with a chip shot.

How to Play a Pitch Shot

Pitch shots are much more like abbreviated fairway shots than chip shots are. Choose a lofted club and grip it the way you normally would. Stand with the ball positioned evenly between your feet with your weight slightly more on your lead foot. Open your stance a little, remembering to compensate for this by swinging along the line of your feet.

Allow your wrists to hinge as you go into your backswing. This time, let the clubhead get higher than your hands in both the backswing and the follow through. Just as with the chip shot, your backswing and your finish position should be equal in motion and acceleration. Don’t lose heart and slow your swing before impact as this will kill your shot.

As mentioned earlier, you can turn this into a flop shot if you need to clear an obstacle but only want the ball to go a short distance and stop quickly. Open your club face all the way and position the ball slightly further forward in your stance. Open your stance as well and keep your lower body still and quiet. Take a big, confident swing, thinking as you do so about skimming your clubhead under the ball and popping it up into the air.

Make the Short Game Your Own

Understanding these two basic short shots will tighten your game and undoubtedly lower your scores. But it will do even more than that. As you use these shots more and more in your regular game, you’ll gain muscle memory and a mental familiarity with what shots work best for certain lies. You’re also going to run across lies you hadn’t predicted or practiced for, and having a competent short game in your arsenal means you’ll develop the ability to think creatively about what shot will get you out of trouble.

And that’s truly reaching the pinnacle of the game.