Professional golfers have an arsenal of shots to choose from when they’re approaching the green. Whatever the situation and whatever trouble they’ve gotten themselves into, you can bet they’ve practiced the way out hundreds if not thousands of times.

If you’re a weekend golfer like the rest of us, you’re probably familiar with reaching for your wedge for a typical chip shot. The problem with this is it isn’t the right shot for every ball and pin position. You might have a tight lie. You might have branches in the way. You might need to clear a small obstacle but still have lots of green to work with.

In these cases, a bump and run can be your get-out-of-jail-free card.

How to Execute This Score-Saving Shot 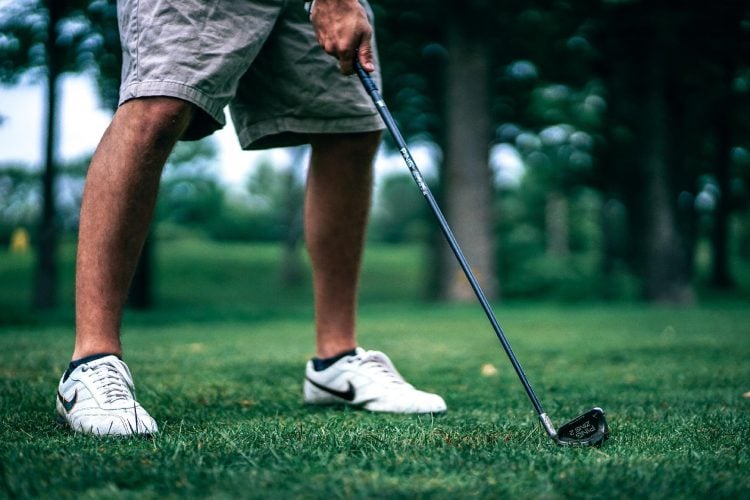 There are five basic elements to the bump and run.

You need clean contact with the ball. Hitting down on it creates backspin, especially if you’re using a club with a lot of loft. A bump and run is all about letting the ball find the green and roll with it, not halting it in its track or putting it in reverse.

You don’t need to set up for a full-power swing. Instead, stand with your feet about as wide apart as you would for a putting stroke. Keep your feet square and add a bit more of your weight to your leading leg.

3. Put the ball back in your stance.

Keep your wrists in position like with a putting stroke. You want to maintain the triangle created by your wrists and forearms throughout the stroke. Keep your lower body anchored while allowing your shoulders to do all the movement, rotating back and moving forward in a smooth motion. This is another reason why choking up on the club is necessary. If you don’t, you’re likely going to cut the grass with your club head, botching your whole shot.

Choose something between a 7 and 9 iron. In fact, practice with all of your irons. The longer the iron, the more initial distance you’re going to fly the ball and the longer it will run out. Practice your bump and run and watch how each iron affects the ball’s flight and roll.

A Bump and Run? What’s That? 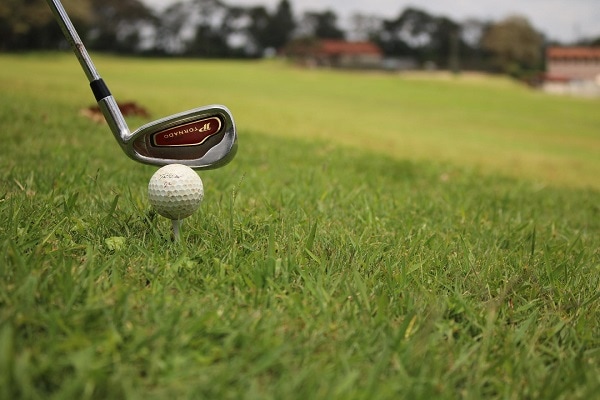 A bump and run won Larry Mize the Masters in 1987 in an unforgettable playoff against golf giants Greg Norman and Seve Ballesteros. His textbook bump and run took out all the undeniable trouble in the shot and rolled the ball straight into the cup for a birdie that Norman couldn’t match.

A poor bump and run can also hurt. It cost Andrew Landry his only final round bogey at the Valero Texas Open in 2018 (although he ultimately won the tournament). Landry’s mistake was choosing a club with too much loft, causing the ball to come to a stop instead of rolling. Knowing which club to use is crucial to making the most out of a bump and run.

So, what is this shot we keep going on about?

The bump and run is the marriage of a chip shot and a putt. It’s a low-trajectory shot with a controlled run-out; how much the ball runs depends on the loft of your club and the slope of the green.

As we said, weekend golfers become comfortable with grabbing a club with the most loft around the green, intending to hit a high, soft shot that will either die as soon as it lands or spin back towards the pin. Of course, this is a good option in the right circumstances. Let’s say you’re south of a green-side bunker with the tee close to the lip of the bunker and a ton of runoff behind it. A well-executed flop is your best option. (A badly executed flop could go literally anywhere, including the kitchen sink of a neighboring house.)

The point of the bump and run is to get the ball to check rather quickly, either just before the green or just after, and then roll out like a putt. Because the second half of the shot is so much like putting, taking the undulations of the green into account is important. You want to aim with as much focus as if you were on the green itself, putter in hand.

When Bump and Runs Come in Handy

Obviously, the bump and run isn’t for every situation. Here are four instances where it’s going to help tremendously.

When Trees are in the Way

You know what it’s like to have a perfectly good green shot obscured by the low-lying branches of a nearby tree. The bump and run is perfect for this situation. Because of it’s low trajectory, you can keep your ball well under those troublesome limbs and reach the green without knocking down so much as a single leaf.

When You Have a Tight Lie

A tight lie is when your ball is resting on an almost rock-hard surface, such as an area of grass that has been burned by sun exposure or fertilizer, or particularly hard-packed dirt. A bump and run is going to give you more room for error than trying to put loft on the ball, which may well fail if you can’t get your club head under the ball to launch it in the air.

When You Have Lots of Green Ahead of You

Do you know what the four worst words to hear in golf are? “It’s still your turn.” If you haven’t aimed at the pin from off the green only to land it miserably far from the cup, you haven’t played much. When the flag is in the farthest position on a lengthy green, go for the bump and run. The forward spin on the ball is going to get you much closer to a tap-in putt than virtually any other shot.

When it’s a Windy Day

Wind can take charge of your ball, pushing it in whatever direction it sees fit no matter your best intentions. Minimize the wind’s effect on your ball flight by keeping it low and shortening the amount of time it’s actually in the air. Now, if it’s so windy it can roll your ball clean off the green the way it did for Billy Horschel at the 2016 Masters, it might be time to hang it up and head for the clubhouse for a round of beers instead.

How to Practice the Bump and Run

Now that you’re familiar with the basic mechanics of the bump and run, as well as the best times to use it, it’s time to practice. You may find the most difficult part of the shot is maintaining the triangle of your forearms in your takeaway and follow-through.

It can feel quite unnatural at first to not break your wrists. Practice keeping your wrists quiet by gripping your club nearly in the middle of the shaft. Then rock your shoulders gently back and forth. If you break your wrists, the butt of the club is going to jab you in the ribs.

A good way to get familiar with which iron to use, set up a practice area with at least three targets at differing distances. Starting with your longest iron and working your way to your 9 iron, aim at each of the targets. Take note of how differently the ball reacts to each iron while keeping your backswing and follow-through the same.

Remember to rock like a pendulum: steadily, easily and keeping the same length on both sides. It’s also important to remember that how far your ball goes with the bump and run is influenced more by club selection and how lengthy your backswing and follow-through are, not by how hard you swing. Trying to inject force into your swing is likely going to cause you to hinge your wrists, which will defeat the point of the shot.

If keeping a low trajectory is stumbling you, try the limo drill. Stick two poles upright into the ground about five or six feet in front of where you’re going to hit the ball from. Tie a piece of string between them. You can vary the height of the string but keep it reasonably low enough to challenge you to hit a delofted shot. Then challenge yourself to keep your ball flight beneath the level of the string.

Mastering the bump and run will shave strokes off your game, improving your handicap and making you look cool in front of your friends. It will also save you a lot of frustration. In the wonderful game of golf, there’s already enough of that to go around.